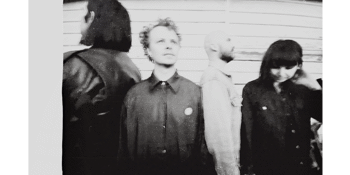 supported by Delivery and Muma Ganoush
John Curtin Hotel (Carlton, VIC)
Friday, 10 December 2021 8:00 pm
9 days away
18 Plus
Rock
POP
Alternative
Send this event to
“One of the most important bands in Melbourne” - ROLLING STONE

Due to popular demand Dr Sure’s Unusual Practice return with a bigger and better Album Launch for their new LP Remember The Future? Vol 2 & 1. After selling out 2 launches in 2 hours the band bring their electrifying live show to a larger stage in the Curtin bandroom as a part of Melbourne Music Week. They’ll be bringing along Marthouse Records label-mates Delivery and Muma Ganoush - a celebration of community for the burgeoning independent label.

Led by Dougal Shaw (also known as Marthouse label founder and guitarist for Cash Savage and the Last Drinks) Dr Sure’s Unusual Practice emerged from the Oz underground as a potent force and clarion voice with their 2019 debut The West, followed by 2020’s fiery EPs, Scomo Goes to Hawaii and While Aus Burns. Their powerful new album, Remember the Future? is a 31-minute whammy of 10 propulsive robo-punk anthems which document the dystopian absurdity of our times, informed by an innate hopefulness and staunch belief in a better future. It was recorded over two days (with a year and a global pandemic in between), with studio wizards Nao Anzai (Rolling Blackouts C.F., Floodlights) and Max Ducker (Amyl & The Sniffers). The album is another sonic leap for a band who’s drawn comparisons to Parquet Courts, Tropical Fuck Storm and Devo and were recently named one of the most important bands in Melbourne by Rolling Stone Magazine.
Listen to "How Can Anybody Be Sober These Days?" HERE