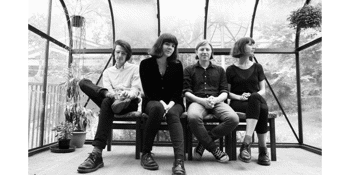 Following the release of their acclaimed third album Olympic Girls, one of New Zealand’s best loved indie bands crosses the Tasman for a long-awaited return. A rare blend of eloquent lyrical craft and explorative musicianship, the songs of Tiny Ruins have been treasured by crowds and critics for over a decade. Via an eclectic raft of influences, the musical world of Hollie Fullbrook and band spans delicate folk, lustrous dream pop and ebullient psychedelia.   Building on the sparse minimalism and intricate songwriting of earlier releases, the band’s third album Olympic Girls comprised a taut and agile quiver of songs, dancing with explorative instrumentation and a pop sensibility that springs with life.

“I've heard Olympic Girls, and I had to pick my jaw up off the floor”, wrote Grant Smithies. “Clustered around more introspective passages typical of confessional singer-songwriters are gnarlier phrases that give her work its buzzy voltage: arresting visual images, weird associations, daisy-chains of telling detail.”